The Film and TV Charity is deeply saddened by the death of its long-standing Trustee and giant of the UK film industry Trevor Green. 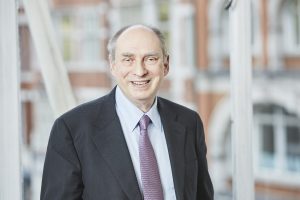 Trevor ran the highly successful Entertainment Film Distributors with his brother, Nigel, launching such multi-Academy Award-winning titles as Gangs of New York, Gosford Park and the Lord of the Rings trilogy. Several of his titles were also showcased as Royal Film Performance™ films to raise funds for The Film and TV Charity.

He was always a popular figure within the industry, held in great affection by a large circle of friends and colleagues. His kindness, charm, and generosity will be remembered by Trustees and staff at The Film and TV Charity, who all extend their condolences to his family.

Chair John Pike said: “It was my and my fellow Trustees privilege to know Trevor as a friend and colleague on the Board of the charity, always supportive yet challenging and a great advocate for the transformation we have gone through, His compassion and kindness to all he came into contact with exemplified his charitable spirit. We will miss him greatly and our thoughts and prayers are with his family.”

CEO Alex Pumfrey added: “Trevor was a huge supporter of the work of The Film and TV Charity. His kindness and care for others is the spirit of the charity, past and present, and he embodied the community of our fantastic industry like no one else I know.”

Trevor served as Trustee of The Film and TV Charity (then the Cinema and Television Benevolent Fund) for 16 years, in which time he helped steer the charity through the transformation which has radically grown its reach and impact, including our work today to support the many people in the industry affected by Covid-19, distributing £3 million to those in greatest need.

In December 2019 he joined other Trustees at the fundraising Royal Film Performance™ of Sam Mendes’ 1917, at which he was delighted to meet His Royal Highness Prince Charles and the Duchess of Cornwall.

The Film and TV Charity will commemorate Trevor’s enormous contribution to the industry and the charity later in the year.